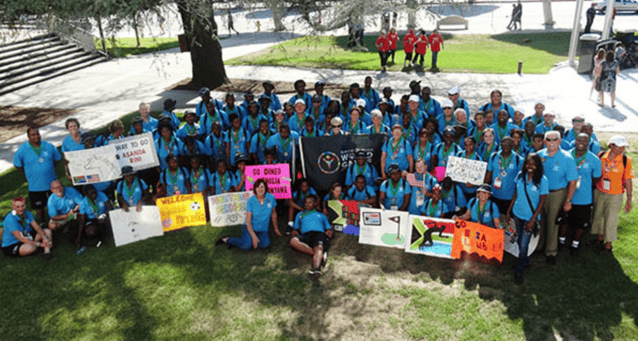 Throughout Los Angeles, 6,500 athletes and 2,000 coaches, representing 165 countries are being hosted by cities from San Diego to San Luis Obispo for The 2015 Special Olympic World Games, the largest sports and humanitarian event anywhere in the world in 2015. Over 80,000 spectators are expected at the event, making it the single biggest event in Los Angeles since the 1984 Olympic Games. Yesterday, America's Christian Credit Union employees joined together to welcome, celebrate and cheer for Team South Africa at the Glendora Hometown Parade!

As a host town, the City of Glendora extended a warm community welcome to the 71 athletes and 25 support staff from South Africa. During the afternoon the city planned tours and activities for the athletes which led up to yesterday's hometown parade.

In the week prior to the parade, ACCU employees worked hard to design and decorate 23 posters for Team South Africa, honoring and encouraging 18 individual athletes from within their delegation. The staff was honored by the opportunity to make posters and cheer for the athletes in the parade. They also had sincere hopes of meeting the athletes after the parade.

As the delegation of South Africa marched through the parade route, they spotted and pointed to the signs featuring their names with joy and excitement. One athlete shouted to the sideline with enthusiasm, "We love you too!" in response to a poster reading "ACCU Loves You!" At the end of the parade the ACCU employees took their posters to Glendora City Hall in hopes to meet the athletes. The employees smiled from ear to ear as they met the athletes and were given the opportunity to present them with their posters. "It was truly the best experience. The athletes were so happy to see that we had made posters just for them. That made my day!" remarked Katie Karlsson, one of the participating ACCU employees.

Mendell L. Thompson, President/CEO of America's Christian Credit Union, also Glendora's Council Member, emphasized how much it meant to join the City of Glendora in welcoming the delegation of South Africa. "These athletes are such an inspiration to all of us and we are honored to have them here," said Thompson, "We are very proud of them and all they will achieve in the 2015 World Games."