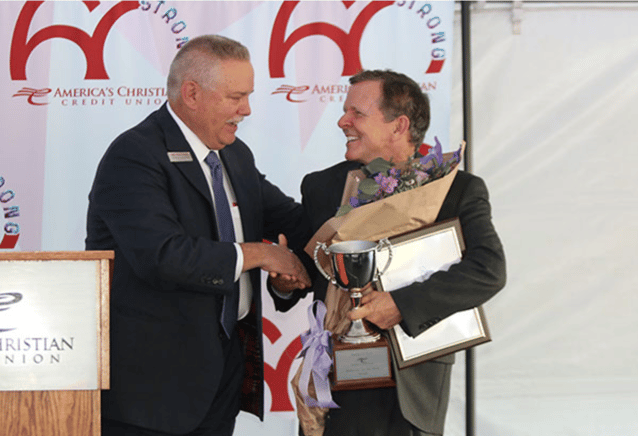 Sixty years later, on the beautiful sunny afternoon of Friday, April 20, 2018, at its Annual Meeting, members, employees, the Board of Directors, Supervisory Committee, community leaders, and local ministry and business partners came together to celebrate the credit union’s enduring success and honor God for His faithfulness over the six decades.

It was a memorable day of celebration! Attendees had the chance to reflect on ACCU’s consistent attention to mission and values and recent financial success. Under the leadership of President/CEO, and current Glendora Mayor, Mendell L. Thompson, ACCU has helped place over 1,700 children in loving families through its adoption lending program, and has supported over $245 million in church expansion projects through a wide variety of corporate loans and financing solutions. ACCU, a not-for-profit Christian financial institution, currently oversees $452 million in managed assets and serves over 165,000 members across the country, and posted its strongest year to date in 2017.

For ACCU’s senior management and volunteer officials, the Annual Meeting festivities began in the early afternoon with the Board of Directors’ meeting at the Glendora headquarters. To help mark this historic moment, ACCU Vice Chairman Dr. Kevin Mannoia presided over a private communion service in recognition of and gratitude for what God has enabled and inspired the credit union to accomplish for the Kingdom. “This [communion] represents the identity of ACCU through which our mission flows in the daily activities of what we do in the CU. This moment is a wonderful opportunity for us to bring together who we are with what we do. These are not compartments that we separate; these are intricately interwoven features of being Christ-followers who are compelled to the mission of using our gifts in a world that needs the influence of Christians,” Mannoia said.

Prior to the start of the Annual Meeting, all in attendance enjoyed live entertainment by Azusa Pacific University's Men’s Chorale; lawn games; and a complimentary photo booth. LucaBella Fine Foods provided an array of hors d’oeuvres, while delicious desserts, including custom commemorative 60Strong cookies, were provided by Crust and Crumble Bakery, another of Glendora's fine culinary establishments.

Rev. Jerry Ferguson, whose tenure as Board Chairman was extended for another year at this meeting, opened the proceedings and attributed the success of ACCU to God’s favor and the leadership of CEO Thompson, a 41-year credit union veteran. “This past year was the most fruitful in our history. As we continue striving to do God’s work, we are thankful for His blessings, because it is evidence of God’s continuing favor upon our members, ministries, and employees.”

For his part, Thompson, who has been ACCU’s President/CEO since 1986, also credited the consistent efforts of the credit union’s 90 employees for the success, growth, and high member satisfaction that characterize ACCU. In terms of 12-month member growth, said Thompson, “we are the fastest-growing credit union in the country – Number One in the nation! I try never to lose sight of the role that our amazing, dedicated staff plays in living out our mission.”

The big announcement of the night came was when Richard Mathews, AVP of Human Resources, was revealed as ACCU 2017 Employee of the Year, voted by staff. Richard has been with the credit union for 18 years and oversees all ACCU’s recruitment and staffing, employment law, performance management, employee relations, and compensation and benefits, in addition to several committees, including the Live the Mission, Activities, Wellness and Safety. Over the years, Richard has developed a reputation for always going above and beyond the scope of his job duties to ensure staff have a ministry driven, positive, welcoming, and rewarding experience at ACCU. Richard, who serves with dedication and distinction, was presented with a special 60th designed diamond trophy and congratulatory flowers.

As the meeting wrapped up, guests were thanked for their attendance and awarded a special 60th Anniversary gift, and six winners went home with a $60 Visa® gift card from the event raffle. The evening's festivities fittingly ended with the Men's Chorale singing the Doxology, reminding all to "praise God, from Whom all blessings flow."