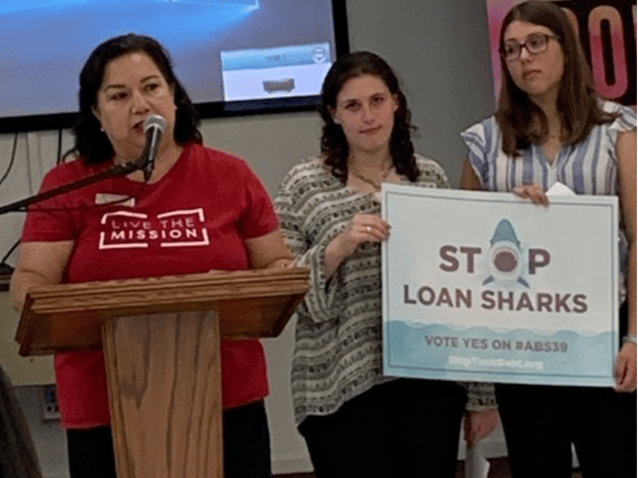 Triple-digit interest rates are on the rise in California. Often times, predatory lenders are saddling borrowers with a loans of $2,500 that can cost the borrower upwards of $10,000 to repay. These products target communities of color and lower-income families, trapping them in crushing debt. According to the National Consumer Law Center, approximately 20-40% of these high-cost loans in California end up in default. Lenders use aggressive debt collection tactics, including harassing phone calls, car repossession, and lawsuits where they can pursue wage garnishment.

“Predatory lending has impacted in a very negative fashion both black and brown communities. Payday loans and such are ungodly and diabolical," said Rev. Shane B. Scott of Macedonia Baptist Church of Los Angeles, which hosted the June 11 leg of the statewide Week of Action tour supporting AB 539.

ACCU’s Evamarie Pisani, VP of Consumer Lending, and staff Jessica Jenkins also spoke at the event. The discussion focused on the need to cap the maximum interest that can be charged on a personal loan." AB 539 is about ending the cycle of debt,” says Pisani. “Opponents argue that the bill would limit access to short-term lending. That is simply not true. There are many lenders across the state, including America’s Christian Credit Union, who help borrowers with their need to access short-term lending while ensuring that their repayment terms are reasonable. This responsibility should be extended to all lenders.”

Introduced by Assemblywoman Monique Limón (D-Santa Barbara), who currently leads the Assembly Banking Committee, AB 539 is supported by community and faith-based organizations, labor groups, cities and counties, and lenders, excluding those that charge 100% APR or more. Past efforts to advance this issue have failed, but through strong bipartisan committee leadership on the part of Senate Banking Chair Senator Steven Bradford (D-Gardena) and Vice-Chair Senator Ling Ling Chang (R-Diamond Bar), AB 539 was able to move forward with a 6-0 vote on June 26. It has been referred to the Judiciary Committee, which is chaired by Senator Hannah-Beth Jackson (D-Santa Barbara). The hearing is scheduled for July 9.

The Californians for Economic Justice website lists ACCU as a resource for alternatives to predatory lending and for financial literacy. For more information on how to get involved please visit: Californiansforeconomicjustice.org.