A Forever Family for Emmi 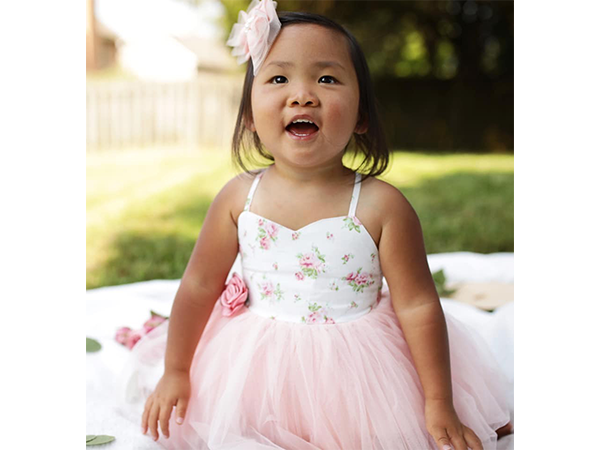 When Amanda Crawford Cagle was a little girl, all she wanted to be when she grew up was a mom. Two years after marrying her high school sweetheart, Caleb, she was thrilled that her childhood dream was about to come true.

The pregnancy turned out to be very complicated, but with God’s help Amanda delivered a healthy baby boy named Grant. And then one day in the summer of 2017, the young mom’s story took a frightening turn when she was violently sick after a day at the beach.

The doctors performed a series of tests and discovered that Amanda’s platelets had plummeted to alarmingly low levels. She was sent to see a hematologist, who said something that would hit her like a dagger: “Do not get into a car wreck, and do not get pregnant.”

This, then, was the answer to her desperate pleadings for a second child. God had said no, and she was shattered.

At one point during the ensuing period of grief, it struck Amanda that Grant was the miracle baby she might never have had, and that instead of feeling resentful, she needed to be thankful. Not long after this revelation, while driving back from a friend’s home, she prayed that God would enable her to rejoice as other women became pregnant and had babies. A moment later she heard God say, “I want you to pray about adopting.”

Amanda was caught off guard. Adoption was not on her radar, because after her son’s birth she’d decided that she would never adopt. “I couldn’t imagine loving an adopted child the way I loved Grant,” she candidly admits.

Despite her reservations, Amanda did not dismiss what she had heard. If God really wanted her to adopt, He would change her heart and confirm that this was from Him. She began to pray in secret, not even telling her husband, in case this was all in her imagination.

A month or so later, her sister gave birth to a boy. As she held her nephew for the first time, Amanda broke down and wept. “In that moment I realized that I could completely love another baby like it was my own,” she says. “God was telling me, You can do this!”

Now it was Caleb’s turn for a change of heart. One Sunday at church, they announced an informational meeting for people who were considering adoption. Amanda’s father leaned across the pew and said, “I think you guys need to adopt.”

Amanda stared at him, stunned. No one knew about the prayers she had made in secret these past two months, and now her own father was encouraging her to adopt! On the drive home, she shared her secret with Caleb. “He knew about my grieving and letting go of a second child, but he didn’t know about the adoption part,” she explains.

Caleb was on board at first, but then began to have doubts. Over the next few weeks Amanda had to constantly place the matter in God’s hands and trust that He would change Caleb’s heart. All the while, she was still sick and on steroids, which were making her feel worse. One Sunday she went forward to receive prayer from the church elders.

“We told them a bit about my health issues, not going into detail and not mentioning adoption at all,” recalls Amanda. “One elder prayed for areas of my body that I’d been having issues with. We hadn’t mentioned these symptoms, so it’s amazing how God had led them to pray for those specific things!”

Next the elders prayed for Caleb, and this time they did something even more astonishing. They prayed that God would give Caleb eyes to see Amanda’s heart!

Right away Caleb realized that God was asking him to see his wife’s heart regarding adoption, and he eventually came around. Shortly afterwards, Amanda’s primary care physician took her off the steroids. Within a month, her platelet count was the highest it had been in years! “I knew that this was the Lord’s way of letting me know that I was on the right path,” she says.

As the Cagles prayed about where to adopt from, they both felt prompted to research Asian countries rather than searching in the US, even though the need at home is great.

“Two days after deciding on South Korea, we saw a little girl on the waiting list with a face that stole our hearts,” Amanda recalls. “She had some medical issues, but we couldn’t get her off our minds. Through a series of very clear confirmations, we knew that she was the daughter we’d been praying for.”

Now everything was in place—except for one thing. Adoption was not going to be cheap. As they prayed for financial provision, the Lord led Amanda and Caleb to ACCU’s website. The consumer lending officer with whom they spoke encouraged them to apply for the credit union’s low-interest adoption loan. They were approved, and the money was in their account within weeks.

“The adoption loan made the process so doable and stress-free,” says Amanda. “ACCU is a Godsend, and we really are so grateful for you!”

Thanks to the loan, Caleb and Amanda could take 4-year-old Grant to Seoul in April, to meet his new sister, Emmi. The siblings bonded instantly, which was another amazing answer to prayer, and Emmi joined the family a month later.

“We feel honored and humbled that God would choose us to be a part of Emmi’s story,” says Amanda. “She’s a brave, strong little girl and we feel so privileged to be her forever family. There were days we didn’t know when we’d make it to the finish line, but God always reminded us that He was working it all out, as Romans 8:28 promises. He has used ACCU over and over again to show His faithfulness in this journey, and we are truly grateful. Thank you for playing such a special role in our adoption story.”

If you are considering adoption, ACCU has several options, and the terms can be tailored to suit your needs. Some of our options include:

To find out more, please give us a call at 800-343-6328. One of our corporate priorities is building Stronger Families, and we’d love to help build yours!

Finding the Right Financial Provider for Your Adoption